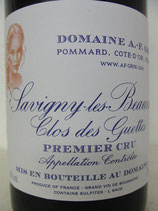 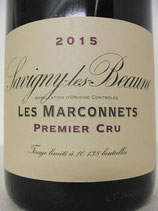 The 2015 Savigny-les-Beaune 1er Cru Les Marconnets has quite a broody bouquet with darker fruit than the Beaune Clos du Roi: blackberry at first, plenty of damp autumnal undergrowth developing in the glass. The palate is very well balanced with attractive sucrosity on the entry, hints of blood orange and more red berry fruit here, Morello cherry and crushed strawberry that leads to a very poised but energetic finish. This represents another superb wine from the domaine. 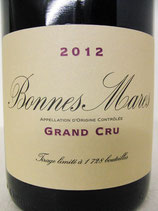 Tasted blind at the annual "Burgfest" tasting in Beaune. The 2012 Bonnes Mares Grand Cru from Domaine de la Vougeraie put in a stellar showing under tough peer group. It has an intriguing animally nose with just a touch of menthol infusing the black cherry and raspberry fruit that lend it a medicinal personality. The palate is medium-bodied with fine tannin, elegant in the mouth, sensual and almost opulence, yet there is an abiding sense of control and finesse here that takes this to a higher level. There is some very assiduous skillful winemaking here. This is a Bonnes-Mares that totally rocks - up there with the Roumier and de Vogüé's of this world. Chapeau winemaker Pierre Vincent.

Domaine de la Vougeraie was founded in 1998 when the domaines of Claudine Deschamps, Pierre Ponnelle, Louis Voilland and L’Heritier-Guyot were merged. I remember it well because at the time I was exporting L’Heritier-Guyot’s wines to Japan (to be frank, they were quite ordinary back then.) The man behind the venture was Jean-Claude Boisset, whose own considerable holdings meant that Domaine de la Vougeraie became a significant player in the Cote d’Or, with 37 hectares of prime vineyard including seven grand crus to their name. I have to be honest and say that like many others, I liked the first few vintages of their wine, but found them a little predictable and seemed to struggle for charm and personality. Perhaps that was a reflection of former winemaker Pascal Marchand applying the practices he had learned at Comte Armand: a lot of new oak with 100% de-stemmed fruit – not really my bag. When he departed for pastures new, incoming winemaker Pierre Vincent seemed to apply a gentler touch. The new oak is still part of the wines’ character, but there is certainly a more considered approach, plus he is more open to using whole cluster fruit. Managing such an array of wines with a relatively small team cannot be easy in challenging vintages such as 2012, or for that matter 2013. Pierre told me that his average yields were 22 hectoliters per hectare, though for the grand crus, they were down to 17 hectoliters per hectare.