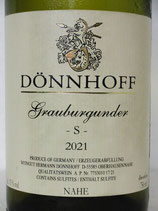 The 2021 Grauburgunder –S– shows a deep and intense nose of fully ripe and finely spicy Pinot Gris berries with hints of flint stones, nougat and mocha. Tight and complex on the palate yet also finessed and pure, with vibrantly fresh minerals and phenolic grip, this is a full-bodied, intense and persistent white with fine yet still present tannins that need two years to fully intertwine with the fruit. 13% stated alcohol. Natural cork. Tasted in July 2022. 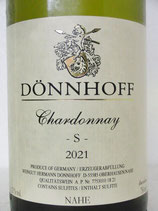 From old vines in the Roxheim Höllenpfad and vinified in stück (1,200-liter oval oak vat), the 2021 Chardonnay –S– opens with a deep, pure, intense and spicy mineral bouquet of bright fruits and crushed stones. Vinified in stück for nine months, this is a lush and juicy, very intense yet also highly refined Chardonnay with refreshing lemon bitters and flavors on the saline and yeasty, well-balanced finish. This is a gorgeous, very stimulating Chardonnay that intermingles its juicy fruit with mineral freshness with ease and tension. 13% stated alcohol. Natural cork. Tasted in July 2022.

2021 is, after a long time, once again a classic vintage, something Cornelius Dönnhoff has not had in this century, but for his father Helmut, a harvest in late October and November was still common. The harvest at Dönnhoff was a good two or three weeks later than in recent years, after there had been no hot spells but frequent showers without thunderstorms. Peronospora was the challenge of the vintage. It required meticulous crop protection as well as foliar work to keep the foliage wall airy and healthy. Without such, as well as a late harvest, physiological ripeness would not have been achievable in 2021. The harvest began in the last week of September and lasted until the second week of November, when the nights had long since returned to a sensitive cool. Must weights were low, but the grapes were still ripe, even though acids were very high. Dönnhoff maintains a large team and was able to harvest at the right time in every site. Since there was virtually no botrytis in the middle Nahe, it was not possible to select any Beerenauslesen and Trockenbeerenauslesen here, just Eiswein. The musts were cool due to the cold nights and could be processed without haste. That the 2021s also managed without residual sugar to balance the high acidity (10 grams per liter) is something no one would have thought at the beginning of harvest, even at Dönnhoff. But since it was partly precipitated as tartar, the wines are riper and rounder on the palate than was thought in the fall. In order to buffer the acidity naturally (with potassium and calcium), the musts were left on the extract-rich grapes longer than usual. The tartaric acid thus found binding partners and could partially precipitate, if the wine was given enough time. The results of the vintage are outstanding, especially with Dönnhoff, especially with the Grosses Gewächs and the Auslese category. I caught the GG from the Dellchen at the perfect moment at the end of July, but the wine still tasted great to me four weeks later in Wiesbaden. 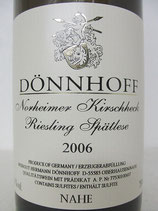 Donnhoff’s 2006 Norheimer Kirschheck Riesling Spatlese smells beautifully of iris, cherry, lime, and honey. Juicy melon and cherry fruit are underlain by subtle salinity on a satin-textured palate, and this finishes with terrific refreshment, refinement, and lift – wafting, lilting as though its finish were yet another long inhalation. It’s true, I’m crazy for what Donnhoff does with this site, but the reason the wine’s quality is so often underestimated by other critical observers of the wine scene is because it is inherently delicate and doesn’t demand that you pay attention. Those who fail to attend will leave more for the rest of us. Time will tell how these mature, but my guess is this will be lovely for two decades. 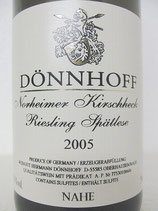 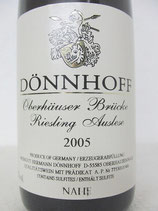 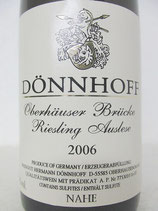 The 2006 Oberhauser Brucke Riesling Auslese smells of mint, black tea and raspberry distillate. The herbal, red berry, and honey concentration on the palate by no means precludes an uncanny sense of mineral presence. Salts and wet stone coat the palate even as citrus, berry, and resinous herbs penetrate with almost frightening intensity and focus. No concessions to cushions on the furniture for lolling about (or to easy early drinking) have been made. Lock this tightly-wound and -stitched super-essence of Brucke away for at least 15 years before revisiting and count on more than four decades of fascinating evolution. My guess is that this – even more than Donnhoff’s other 2006 Auslesen – will always taste like a wine from some other vintage, at least when measured against its great Middle Mosel counterparts. 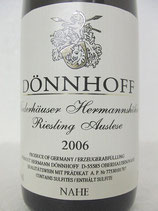 Donnhoff’s 2006 Niederhauser Hermannshohle Riesling Auslese introduces a caramelization of fruit and a roasted richness that represent a more obvious expression of botrytis, yet the springs of acidity are incredibly tightly-wound as well and there is absolutely no sense of heaviness. One can taste the effect of botrytis that was being constantly ventilated in the best portions of this great site, concentrating all components, including acidity, while juicy berries also still abounded. The fruitcake metaphor is overused and fails to capture the appropriate sense of levity, fluidity, and elegance. Suffice it to say that dried fruits, toasted nuts, citrus rind, honey, white raisin, baking spices, spiritous fruit essences, and singed, caramelized notes all abound, and that the less prosaic layers of this masterpiece – for lack of better words, the meat and mineral dimensions – are only revealed for now to the limited degree that time in the glass permits. The finish finds me licking my lips clean of mysteriously savory, salty residues. Voluminous and dense yet refined and elegant; baroque yet constructed like one of the great pyramids; viscously rich yet dynamic, this will stand – perhaps for half a century – as a monument to its vintner, site and vintage.