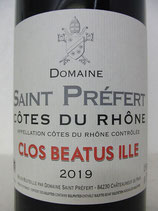 The 2015 Chateauneuf du Pape is a great effort that should be reasonably available. Produced from vines under 30 years old, it's a blend of 85% Grenache, 5% Cinsault, 5% Mourvèdre and 5% Syrah. There's a tinge of chocolate to the raspberry and licorice flavors but also hints of orange zest, cinnamon and clove. It's full-bodied and lush, with a long finish. There's no need to defer gratification, but it should drink well for at least a decade.

The dynamic Isabel Ferrando and her two assistants had wrapped up their harvest activities for the day by the time I arrived but took the time to show me a batch of Syrah fermenting in a demi-muid tipped on its end and covered to keep the fruit flies out. Cool. Moving on to the 2016s, Ferrando said, "I like the vintage a lot. It's a very generous year, always open." She pointed out that since my last visit, she's changed her approach somewhat, looking for more freshness in the wines and vinifying almost entirely with whole clusters, "except for Mourvèdre and sometimes, Syrah." Ferrando continues to make her Domaine Ferrando Colombis here as well, but that stunning wine appears under its own heading. 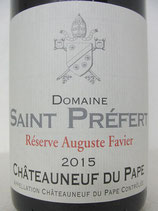 The 2015 Chateauneuf du Pape Reserve Auguste Favier is a blend of 85% Grenache with 15% Cinsault. It pushes the ripeness up a notch from the traditional cuvée toward blackberry, plum and chocolate but remains lively. It, too, is full-bodied and supple, with a creamy texture and a long finish. 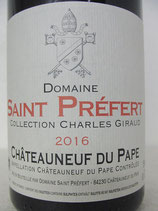 The 2016 Chateauneuf du Pape Collection Charles Giraud is a 60-40 blend of Grenache and Mourvèdre, fermented with all the stems. There's a hint of cocoa, but raspberries and strawberries are the dominant fruit flavors in this lively, zesty wine. Trace notes of mint, lavender and tea leaf add complexity. Full-bodied and velvety in texture, it's intensely concentrated and rich yet not overly heavy or overripe (it weighs in at 15.5% alcohol), with a lingering, elegant finish. It's a tour de force that should age for two decades or more, and it will be interesting to see how it compares to the perfect 2010 after it's had a few years in bottle.